Blog. Facebook’s ‘Custom Audience’ gives you access to new customers that look like you current customers – it gives you ‘lookalikes’ and it is the most  powerful weapon in the Facebook ads arsenal. According to a former Facebook product manager; “It’s the tunnel beneath the data wall that allows the outside world into Facebook’s well-protected garden, and it’s like that by design.”

Such are the words from Antonio García Martínez (@antoniogm) in a Wired-article about How Trump Conquered Facebook and why Russia’s Facebook ads were less important to Trump’s victory than his own Facebook ads. The writer was the the original product manager at Facebook for Customer Audiences, when it was launched in 2012.

A campaign manager for a political party or a newspaper takes a list of emails or other personal data for people they think will be susceptible to a certain type of messaging, e.g. people in Florida who donated money to Trump For America or current newspaper subscribers. The campaign manager uploads  that spreadsheet to Facebook via the Ads Manager tool, and Facebook scours its users, looking for users who match the uploaded spreadsheet, and turns the matches into an “audience,” which is really just a set of Facebook users, but they are lookalikes. The political party or the newspaper can then target these lookalikes with their messages and products. 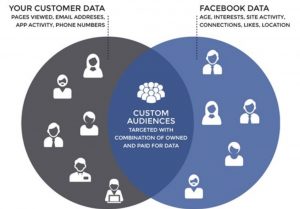 Individual Facebook users and stop the second way of Facebook getting data from others with a cookie-blocker like Ublock or disconnect. You cannot stop the first method where the campaign manager gives Facebook your email because you might be customer at that company. This can only  be stopped by regulators, and I really wonder if this practice illegal. Facebook says it is anonymizing data (which must be a lie, as they have to find YOU and compare YOU to lookalikes), but what about the campaign managers giving Facebook my data? Do they have proper consent for that?

I visited Facebook in 2012 and was surprised when I heard that an ad promoted by a friend of yours counted 4 times higher that a normal ad. Since then Facebook has added ‘customer audience’ to their weapon arsenal and ad money floods into the company. With the Trump-campaign, many has given Russians’ fake news the blame for Trump’s victory. As the author of the brilliant Wired-story ends, it is not the main reason. It is Facebook and the very core of its money machine.

“Plotting Russians make for a good story, and external enemies frequently serve an internal purpose, but the trail of blame often leads much closer to home. It’s right there, topped by a big, blue bar on our smartphone screens.”

With Facebook’s Customer Audience politicians and companies with can manipulate users, because the details of Facebook users have become so overwhelming. It is a democratic nightmare. In a healthy democracy, those in power are transparent about how they use their power. The weak ones, individuals, don’t have to be transparent and the majority definitely shouldn’t. Facebook is paving the way in which individuals become more transparent – and Facebook is doing this, as we say in Denmark, dancing all the way down to the bank.