Skip links
The Norwegian Consumer Council has looked at the terms and the technical features of selected connected toys. The findings show a serious lack of understanding of children’s rights to privacy and security.

Based on what was discovered, consumer organizations in Europe and the United States in cooperation file formal complaints to relevant authorities on what seems to be obvious breaches of several consumer laws.

In their review of the toys, the Consumer Council has found several serious issues:

The day the news came out, Cayla was removed from shops in Belgium and the Netherlands. In Denmark it is still (9 december) available in e.g one of the biggest toy chains Fætter BR. 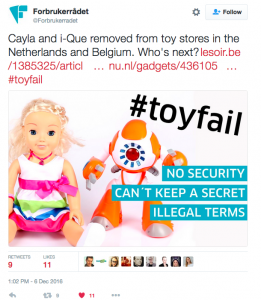 Read the FTC complaint from EPIC

Read about the data ethical issues of an internet of toys in this article by DataEthics.eu’s Gry Hasselbalch:  “A Toy that Wants to Phone Home”

Read “Data ethical considerations for the Internet of Toys” (8 points)