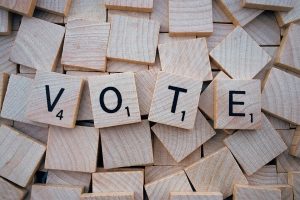 Today elections around the world face problems like violence, corruption, long waiting time, accessibility, affordability and privacy. Blockchain systems promise new opportunities for storing data and securing trust and transparency, but how can they be used to secure elections?

Decentralized blockchain systems provides safe data storage since any changes to the data that is stored are made visible to all participants in the network. This means that malicious interfering with the data in the system, for instance tampering with voting records, cannot go undetected. It is therefore understandable why blockchain systems are considered a safe way of storing election data.

Electronic voting system in general could solve some of the problems elections face today. These problems include not giving equal access to all because of e.g. handicap, work, long waiting time, distance to voting places or the cost of getting there. If it was possible to vote from phones, it would be easier and more accessible for people to cast their votes no matter where they work or live. But in some countries, like Nigeria and Kenya with election-related violence and murders, it would not only be easier to vote, it could actually be more secure to vote from the safety of one’s home.

Swiss Blockchain-based Voting System
Some countries also face problems with corruption when counting and recording votes. If it was possible for people to have their votes recorded directly or to check whether their vote has been correctly recorded, this could help fight election corruption. Agora, a Swiss blockchain based voting system, tries to tackle these problems by allowing people to vote from their phone and check if their vote has been correctly recorded.

But even if it can be guaranteed that the data is stored safely and securely in a blockchain, a blockchain-based voting system also need to assure that the data being fed into the system is correct. It could be possible to enter fake data into a blockchain especially when the data describes actions outside the online universe, like voting. If citizens are to vote from their personal phone, precautionary steps need to be taken to protect the devices from hacking. Election cybersecurity experts, like Matthew Blaze an researcher in computer security and distributed systems at University of Pennsylvania, warn that any kind of online voting will introduce new risks and security vulnerabilities and that protecting connected devices are already hard.

Blockchain-based voting system can address many of the problems faced in today’s election and promises new opportunities, from securing transparency, making the voting process more accessible, affordable and safe. But reflections about the risks of using electronic voting systems also needs to be taken seriously in order not to increase risks and security vulnerabilities in the voting process.