News. The Book HOMO DEUS is a remarkable must-read. It makes you think in-depth about the future, and how we can and should try to shape it. The future scenarios from Israeli author Professor Yuval Noah Harari are mostly gloomy – at least when it comes to survival of the human. This is a summary of the last chapter on DATAISM.

The homo sapien (human) to dataists is an absolete algorithm. Humans have only one advantage over the chicken; we process more data. But what then if we can create a data processing system that is superior to a human in the same way as a human is superior to a chicken?

According to the author, dataism in becoming a religion where the most important ingredient is ‘freedom of information’. Like every religion, dataists are missionary: Connect everything to the system. All humans and things, the body, the cars, the refrigirators, the trees in the jungle. No part of the universe must be left unconnected. Freedom of information is the greatest good of all.

Dataist missionaries believe all good things – including economic growth – depend on freedom of information. Why did the US grow faster than the USSR? Why are Americans healthier and wealthier than Iranians? Thanks to freedom of information. The key to a better world is setting information free. A smart car pool system is better than each having a car sitting in the car park. 50 mio cars can replace 1 bio private cars. Provided, of course, that we renounce our privacy (and self control), so the system knows where we are constantly. 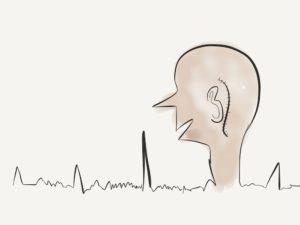 With the Internet of all things, homo sapiens could vanish. The individual is becoming a tiny chip in a giant system. Who writes Wikipedia? Being part of the data flow, make you feel you are part of something bigger than yourself.
In the data religion algorithms are constantly wathing us. True believers risk losing the very meaning of life, if they are disconnected.

“What is the point of doing something, if nobody knows?”

Humanism thought that experiences occurred inside us. Dataists believe that experiences are valueless, if not shared, and that we cannot find meaning within ourselves. The algorithms dicover meanings and tell us what to do. 20 years ago Japanese were universal laughing stocks for taking pictures constantly. Now everyone is doing it. If you go to India and see an elephant, you don’t look and ask yourself: What do I feel. You are too busy taking pictures, and posting them on social media and checking likes. Writing a diary is utterly pointless, if nobody else can read it.

We must prove to the system that we still have value. The value lies not in having experiences, but turning them into free flows of data.

Dataists are not against humans. They just don’t think humans are valuable, according to the book, who questions: Will upgraded human algorithms be fast enough? When we stopped using horses, we did not upgrade them. We abandoned them.

It can take Centuries

In science fiction movies humanity always win in the end and there is love. But in dataism human experiences will lose their values to superior computer programs. Dataists say that experience is an outdated biochemical algorithm.

The move from a homocentric to datacentric world can take centuries. The humanist revolution did not happen overnight either. The humanist idea that; listen to your inner voice, have heart-to-heart talk with other human, write a diary, hold democratic elections, read Goethe will be replaced with the dataist idea; what’s the use of having democratic elections, when algorithms know what you will vote anyway? Listen to the algorithms, they know how you feel. When you contemplate getting married, starting a career, starting a war, ask the algorithm.

Dataism has it critics, and may be we will discover that organism isen’t algorithms after all, writes Yuval Noah Harari at the end of the book. But he believes it has good prospects, as it is spread in many scientific paradigms.  If dataism succeeds in conquering the world what will happen to humans, he asks? Once authority shifts from humans to algorithms, the humanist project may become irrelevant. Dataism threathens to do to homo sapiens, what homo sapiens did to other animals.

We cannot really predict the future.  And humanism makes it difficult for us to imagine a post-human destiny, he states and asks us to consider three things:

– Are organisms really just algorithms? And is life really just data processing?
– What is more valuable; intelligence or consciousness?
– What happes to socienty, when non-conscious algorithms know us better than ourselves?

Get it for ‘free’ as an audible from Amazon